Videos may take time to load…

There are several indicators that the soldier in this footage is, in all likelihood, Corporal (Cpl) Leonard Yush on his way to Blue 2 beach on Iwo Jima.

1) The video title, description and markers indicate that this is footage of Marines in Iwo Jima during World War II AND, according to the January 1945 Muster Roll (Roll 0916), Corporal (Cpl) Leonard Yush was a Marine during WWII.

2) Although the writing on the soldier’s helmet could be interpreted as “VUSH” or “YUSH”, according to the January 1945 Muster Roll (Roll 0916), there was only one soldier in the 4th Marine Division on Iwo Jima with a last name that was 4 letters long, started with a letter resembling a “Y’ or a “V” and ended in “USH” – Corporal (Cpl) Leonard Yush. See the descriptive screenshots below.

3) The Unit Numerical Identification System (UNIS) marking on the soldier’s helmet is a semi-circle containing “412”. The 400 series UNIS markings were used for the 24th Infantry Regiment. The semi-circle tactical marking was used for the 4th Marine Division. 412 designated the 1st Battalion, Company A (Able) AND Corporal (Cpl) Leonard Yush was in the 1st Battalion, 24th Marines (Regiment) of the 4th Marine Division. See the descriptive screenshot below.

It is clear that the first letter of the name on the helmet is a “Y” as in Yush rather than a “V”.

It appears that the entire video (see above), from which the previous footage is taken, was shot from inside the Higgins boat that  Leonard Yush was in on the way to the shores of Iwo Jima. 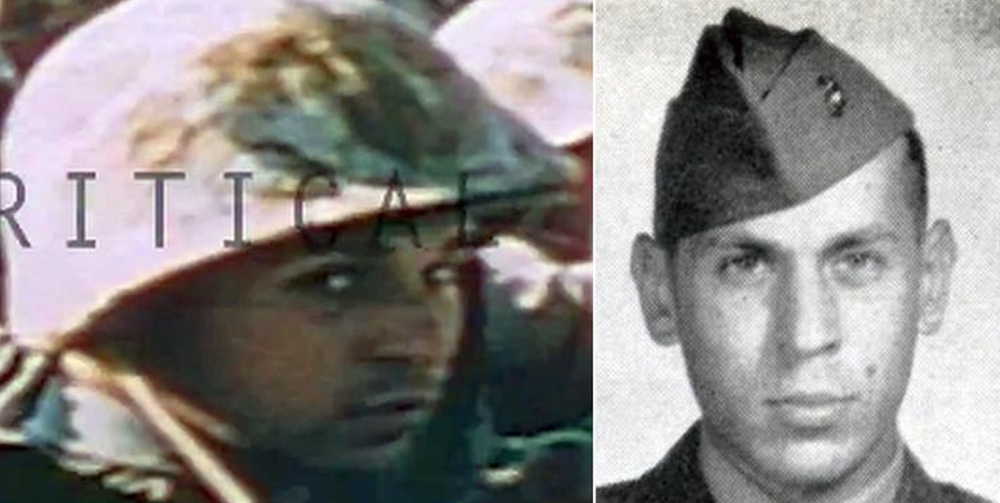